Eighteen months after he closed Australia’s borders, the PM has announced a fast-tracked plan to “take our lives back”. 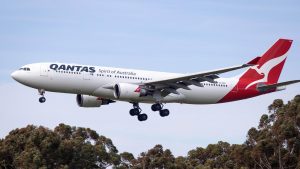 Australia’s international borders could re-open for vaccinated travellers in NSW as early as November 1 under a fast-tracked plan announced today by Prime Minister Scott Morrison to allow us to “take our lives back”.
The proposal outlined by the Prime Minister follows discussions with the new NSW Premier Dominic Perrottet about fast-tracking the rollout of home quarantine.

The move away from 14 days of hotel quarantine for vaccinated travellers is regarded as a crucial step before international travel can start ramping up to pre-pandemic levels. Trials are currently away in several states.

“The NSW Premier and I have been discussing how we can accelerate our plan to open international travel when home quarantine is made available,’’ Mr Morrison said on Sunday.

“I know the NSW Government is looking at ways to fast track home quarantine in November and if that happens we will be able to move to facilitate the opening up of the international border into NSW sooner.

It’s expected that allowing travellers to quarantine at home will spike demand for flights allowing Qantas and other carriers to dramatically expand the number of routes on offer.

The Prime Minister announced earlier this month that the border closures that have remained in place since March, 2020 will be lifted but it was up to individual states whether they will scrap caps on international arrivals and allow home quarantine.

As a result, states including WA and Queensland could shut-out international flights for months to come but residents would be able to fly overseas via NSW.

In a video address to the nation posted on Facebook on Sunday, the Prime Minister said praised Australians for the sacrifices they have made during the pandemic.

Earlier this month the Prime Minister announced the new framework the states will need to meet before they can agree to reopen international travel.

Mr Morrison said Australia was moving towards Phase C of its reopening plan and would hit that goal next month, when the nation has 80 per cent of its population double-vaccinated.

But a number of hurdles need to be cleared before international flights resume again.

The PM said Australia was also working towards “completely quarantine-free travel for certain countries such as New Zealand when it is safe to do so”.

The Prime Minister first announced the border closure on March 20, 2020 to all non-citizens and nonresidents.

Even Australian citizens, permanent residents and their immediate family needed to apply for an exemption to travel and to quarantine at a hotel for 14 days on arrival at a cost of more than $3000.

It will also require the lifting of current international arrival caps that were put in place to manage home quarantine.

The international border ban was initially in place until December 17 but that will now be lifted a month earlier than previously planned.