Border closures are nothing new in the age of COVID-19, but the emergence of the Omicron variant has seen a halt to the planned easing of travel restrictions in Australia. 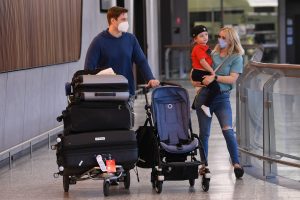 After first being detected in South Africa, cases of the variant have now been detected in Sydney and on the New South Wales Central Coast.

International students were among the visa holders due to be allowed back into Australia from 1 December, but Omicron has upended their plans with the federal government delaying the reopening by a fortnight.

What was the original plan?

After being locked out for more than two years, some eligible visa holders were due to be allowed into Australia from the start of December. This included skilled migrants, international students, as well as those on humanitarian, working holiday, and provisional family visas. Speaking in November when the plans were announced, Prime Minister Scott Morrison said: “The return of skilled workers and students to Australia is a major milestone in our pathway back. It’s a major milestone about what Australians have been able to achieve and enable us to do.”

The federal government had estimated 200,000 migrants holding these visas were expected to take up the offer between December and January. The start of December was also the date when international visitors from Japan and South Korea were due to be allowed into Australia.

On 27 November, following Omicron’s detection in Southern Africa, the federal government reintroduced border security measures on Saturday for travellers coming to Australia from South Africa, Lesotho, Eswatini, Namibia, Botswana, Zimbabwe, Mozambique, and Malawi. People who had been in those countries in the past 14 days were no longer permitted to enter Australia.

There were exceptions for Australian citizens, permanent residents, and their immediate family members. Those who are allowed to enter Australia from those countries have to enter supervised quarantine, normally in a hotel, for 14 days if coming from the listed countries.

What about arrivals from other countries?

There is no federal requirement to isolate if coming to Australia from elsewhere, but several state and territory governments have introduced their own rules.

International arrivals into New South Wales, Victoria and the ACT were told they must quarantine at home for 72 hours, while in South Australia, all travellers, including those transiting through another Australian state, must undertake 14 days quarantine in an approved media hotel.

What is expected to happen in the next two weeks?

The federal government put in a two-week pause as it wanted to buy more time to understand Omicron, how well vaccines can deal with the variant and how transmissible it is. The Department of Health said, in a health alert on the variant, there were unknowns but added there was nothing to suggest the vaccines approved for use in Australia – Pfizer, Moderna, and AstraZeneca – were less effective at preventing severe illness, hospitalization, or death from Omicron.

“We are working to find out how effective vaccines currently approved for use in Australia are at protecting people against the effects of this variant.” advice on the department’s website said.”

Mr. Morrison, speaking at a press conference on 1 December, said “The indications are that Omicron will be a more mild form of the virus. Now, if that proves to be true, that’s a major game-changer. But these things are not yet known.”

Almost 93 percent of the Australian population have had at least one dose of a vaccine, while 87 percent of people aged over 16 have had two doses.

What is happening elsewhere in the world?

Australia is not alone in placing restrictions on travel in light of the new variant. Six countries were added to the so-called red list in the United Kingdom, meaning arrivals from there must stay in hotel quarantine for 10 days, and the United States has also placed bars on non-residents coming from southern Africa.

Other countries have gone further, with Canada introducing isolation requirements for passengers from Nigeria, Malawi, and Egypt.

What is next for visa holders looking to come to Australia?

Home Affairs Minister Karen Andrews told Parliament the two-week pause was not an easy decision for the government to make, but that it was based on health advice. This was echoed by Health Minister Greg Hunt who said the steps were being taken “on the presumption that we will recommence from December 15”.

As it stands, people holding one of 42 different visa types – including a refugee visa, student visa, and working holiday visa, will be allowed to enter Australia from that date without needing an exemption, as long as they are fully vaccinated by a recognized vaccine. These include those being distributed in Australia, along with Sinovac, Sinopharm, AstraZeneca (Covidshield), and Covaxin (Bharat Biotech).